Citizens at Last: The Woman Suffrage Movement in Texas 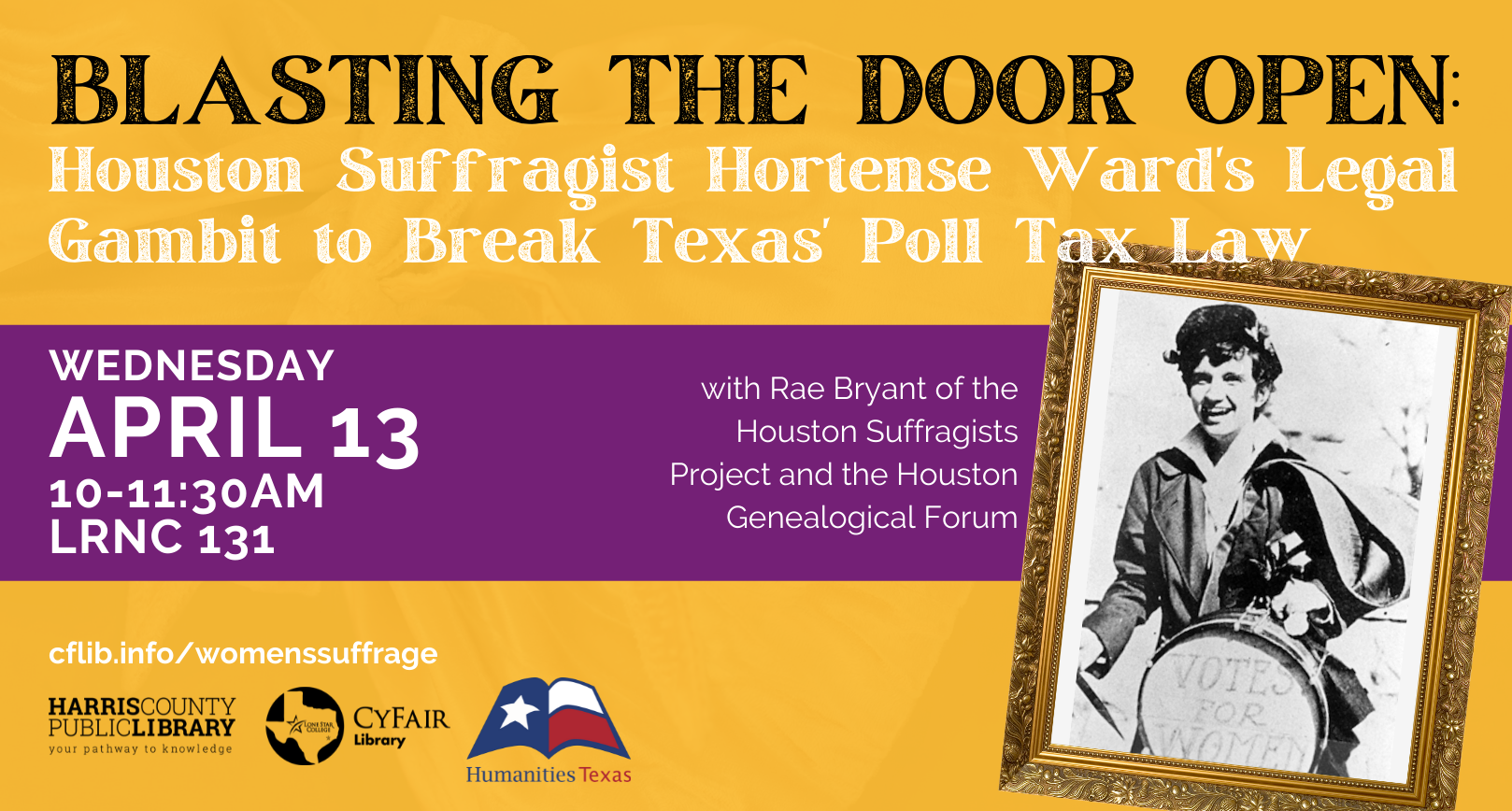 Stop by LSC-CyFair’s library to explore the “Citizens at Last: The Woman Suffrage Movement in Texas,” an exhibition created by the Woman’s Collection of Texas Woman’s University Library and produced by Humanities Texas, the state affiliate of the National Endowment for the Humanities.

The ratification of the Nineteenth Amendment in 1920 ended the women’s suffrage movement and represented a great victory for American women in their quest for the right to vote as U.S. citizens. Texas was the first state in the South to ratify the Nineteenth Amendment, a landmark moment for all who took place in the struggle for representation. “Citizens at Last” focuses on the 27-year campaign for votes in Texas.

Based on the book “Citizens at Last: The Woman Suffrage Movement in Texas,” the travelling exhibition uses archival photographs, newspaper clippings, cartoons, cards and texts to display the struggle in Texas.

“In addition to hosting the ‘Citizens at Last’ display across from our circulation desk, we are excited to offer a series of uniquely related presentations, including a poetry workshop for all to enjoy,” said Librarian Regina Vitolo.

Join LSC-CyFair’s History Professor Dr. James Seymour for his presentation “The Forces of Evil Fear Women’s Vote: Women’s Suffrage in Texas During the Great War” from 10 a.m. – 11 a.m. April 20, in the library, room 131.

Texas was the first southern state to grant women the right to vote in primary elections and Dr. Seymour will discuss the Texas women's fight to secure the vote on the home front while U.S. troops were fighting for democracy abroad in WWI.

For an interactive program exploring the poetics of race and gender through the lens of citizenship and democracy with LSC-CyFair English for Speakers of Other Languages (ESOL) Professor Sharon Bippus and Vitolo from 11 a.m. – 2 p.m. April 23 in the library, room 2215, reserve your spot in the “Citizen: A Poetry Workshop” with an email to Regina.E.Vitolo@LoneStar.edu.

This three-hour workshop first examines segments of Claudia Rankine’s “Citizen: An American Lyric” and a selection of poems from Alice Duer Miller’s “Are Women People: A Book of Rhymes for Suffrage Time.” Then, participants will have the opportunity to write and perform their own poem on the same themes with the guidance of Bippus, the regional representative in Texas for the National Association for Poetry Therapy, and Vitolo, the literary co-chair on the board of Women in the Visual and Literary Arts.

Registration is required for this program and is limited to 25 participants, who will receive a free copy of Rankine’s book at the workshop.

Concluding the series of library programs will be an online “Woman Suffrage in Black and White” presentation 11 a.m. – noon May 4 at cflib.info/philpott.

The history of the woman suffrage movement shows that issues, such as race, complicated efforts to win women the vote. From the Seneca Falls Convention of 1848 to the Suffrage Procession in 1913, and beyond the ratification of the 19th Amendment in 1920, many Black

women had to fight on two fronts: against sexism in society and racism in the suffrage movement.

National Park Ranger Susan Philpott, who will lead this May virtual tour of the Belmont-Paul Women's Equality National Monument, will explore the stories that are missing from the museum exhibits as well as discuss ways to represent a more complete history in the future.

For information on the Humanities Texas traveling exhibition or the LSC-CyFair library’s program series, email Regina.E.Vitolo@LoneStar.edu or go to cflibguides.lonestar.edu/suffrage/citizens.