In honor of the 2020 Centennial of the ratification of the Nineteenth Amendment to the U.S. Constitution granting women the right to vote, Lone Star College-CyFair Library is launching a semester long Suffrage Centennial Book Club (#SuffrageCentennialCYF).
LSC students and community members are invited to join us on WebEx the last Tuesday of July-October and the second Tuesday of November and December to discuss our monthly book selection inspired by voting rights. These conversations will be generative and facilitated by LSC-CyFair faculty in a virtual setting. Please check the library's website and social media (@lsccyfairlibrary) for updates on our #SuffrageCentennialCYF virtual book clubs and programming. If you have questions, email Regina.E.Vitolo@LoneStar.edu.
Learn how to join a WebEx Event from your computer, mobile device, web browser, or phone only. The event is open to the public, but here is the event number and password for reference:

Click on the poster to be redirected to gallery of photos featured in The Woman's Hour by Elaine Weiss. 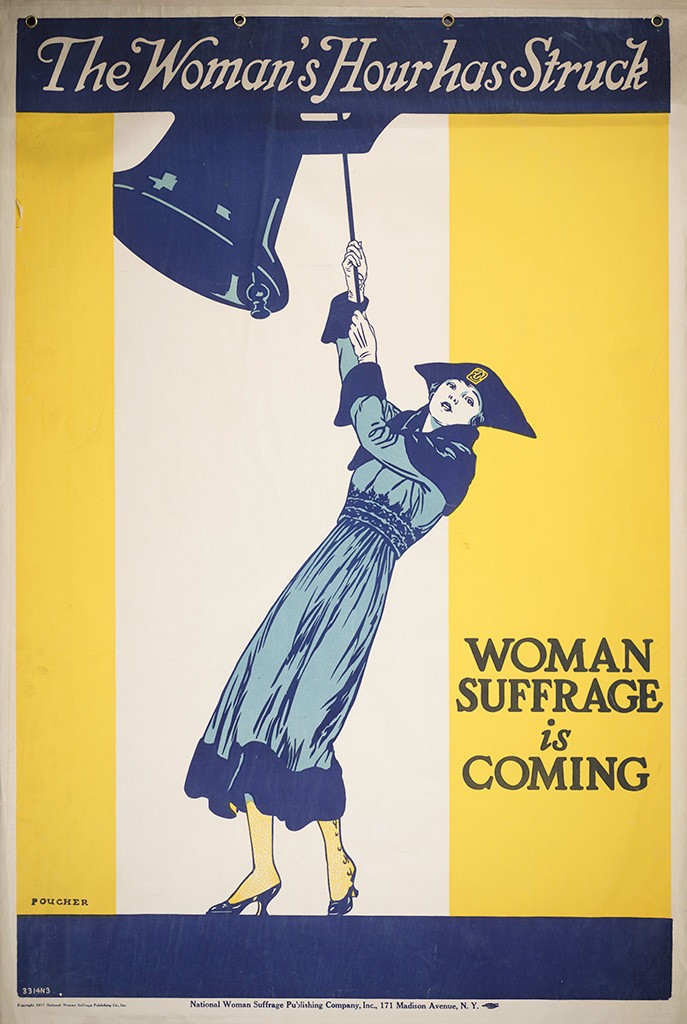 Discussion Questions from The Woman's Hour by Elaine Weiss.

In the summer of 1920, one of the pivotal political battles in United States history unfolded in Nashville, Tennessee, as the Nineteenth Amendment, granting women the right to vote, was on the cusp of victory—or, possibly, defeat. The enfranchisement of half of the citizens of the nation was at stake, and it all came down to Tennessee. The Woman’s Hour details the dramatic climax of the suffragists’ seven-decade struggle for equal citizenship, bringing into focus the powerful forces arrayed against their cause. Employing all the color and drama of a great political novel, Elaine Weiss shows how the core themes of American history and current-day affairs—race, class, money, gender, states’ rights, power, and democracy—all came into play in Nashville, Tennessee, as the Nineteenth Amendment was on the cusp of being ratified. Rich with vivid characters, including appearances by Susan B. Anthony, Woodrow Wilson, Warren Harding, Frederick Douglass, and Eleanor Roosevelt, The Woman’s Hour reveals what it took for activists to win this crucial battle and how close they came to losing. The Woman’s Hour is more than just a vivid work of history, it is an inspiration for everyone who continues the fight for justice and equal rights today.

Questions and Topics for Discussion

1. The two branches of the American suffrage movement—the National American Woman Suffrage Association (led by Carrie Catt) and the National Woman’s Party (led by Alice Paul)—took different approaches towards their mutual goal of winning the vote. Do you think one group was more effective than the other? Why?

2. If you were a suffragist in 1920, do you think you’d align yourself with the NAWSA or the Woman’s Party? (Both women and men were supporters). Why? What attracted women, on the other hand, to the “Antis”? Do you think their fears were unfounded?

3. The suffragists campaigned before there were cell phones; no internet, no social media, not even radio. Can you imagine trying to promote today’s causes with these limitations?

4. The Woman’s Hour describes an important step in our country’s evolution as a democracy. What other steps does our democracy still need to take?

5. Although we treasure our self-image as a nation built upon the bedrock of participatory democracy, our history proves we’re conflicted about who has the right to participate. Voter suppression is a hot topic today. Do you think we consciously make it harder for some citizens to vote? Is voter suppression a threat to our democracy, or just the usual game political parties play?

6. Hundreds of suffragists were assaulted, attacked, and jailed for demanding the right to vote. Have you ever participated in a protest against government policies? Did you suffer any consequences for your actions? Would you be willing to go to prison to protest injustice or to promote a cause you think important?

7. Those opposed to woman suffrage often used religious arguments to warn that expanding women’s rights, including the vote, violated Biblical teachings and went against “God’s Plan” (women belong in the home, not in the public sphere). Do you think religious rationales should be used in forming public policy today?

9. Some corporations clearly felt threatened by the prospect of women voters, and worked to influence public opinion and legislative action. The suffragists often complained that corporate interests were secretly financing anti-suffrage campaigns around the country. Do you see any similarities in what the suffragists faced then and the modern phenomenon of “dark money” entering political campaigns today?

10. The suffragists touted the benefits of allowing women to vote by maintaining that women would clean up corruption in politics and insist upon better laws protecting families and children. Carrie Catt believed women voters would bring about an end to war. Do you think women voters have improved our political system? In what ways?

11. If the issue of women’s political equality—specifically the right to vote—was being decided today, and, as in 1920, only men were given the power to decide, do you think the amendment would pass?

12. Voter participation in the United States is well below other democratic nations. Many Americans, like the suffragists and subsequent civil rights workers, fought long and hard to win the right to vote. Many have died defending our freedoms. Some democracies impose a fine for not voting. Do think voting should be a mandatory responsibility of every eligible U.S. citizen?

13. Do you think the U.S Constitution should be changed in any way? What amendments would you like to see considered?

View the extended trailer of American Experience:The Vote below.
Access the NOVEMBER presentation & virtual book club meeting link HERE.  Learn how to join a WebEx Event from your computer, mobile device, web browser, or phone only.The event is open to the public, but here is the event number and password for reference:

Unfortunately, the video file for this book discussion recording was corrupted. You can view a video of author and historian Joanna Neumann discussing women's suffrage and fashion here:

Download and print your own Suffrage Centennial Book Mark!

Click HERE to join the WebEx event on the scheduled day and time. Virtual lobby will open ten minutes prior to the scheduled meeting time. Clcik on the book cover to redirect to the library catalog and reserve your copy of the book.