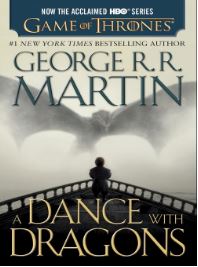 I don’t feel particularly guilty about them, but the Song of Ice and Fire series of fantasy novels are all-time favorites that some may consider guilty pleasures. A Dance with Dragons was one of the last novels to keep me up late into the night reading because I couldn’t put it down.

What is your favorite genre? Which do you avoid?
I love all literary fiction. We are lucky that “literary” versions of most genres are available, like Susanna Clarke’s fantasy, Jonathan Strange & Mr. Norrell, and Joyce Carol Oates’ historical fiction, The Accursed, and all the incredible speculative literary fiction being written. I struggle with books whose prose isn’t as refined, such as certain pot-boiler mysteries or romance.

What is a book that you’re afraid to read?
Crime and Punishment by Dostoevsky. I don’t consider myself thin-skinned, but the cruelty to humans and animals just went too far. I had to put it down and have been too scared to pick it back up. Also, Stephen King’s Salem’s Lot made me afraid of windows for most of my childhood. I’ve never finished it, either.

What book is currently sitting on your nightstand?
Elizabeth Gaskell’s unfinished final novel, Wives and Daughters.

What’s the last great book you read? The last book you recommended to everyone you know?
I recently re-read George Eliot’s Middlemarch, and read Dickens’s Bleak House for the first time. I can’t stop talking about them.

Are there any classic novels you read recently for the first time?
Bleak House by Charles Dickens, The Mill on the Floss by George Eliot, Herland by Charlotte Perkins Gilman, and Cousin Phyllis by Elizabeth Gaskell. I had a son in April, and since then cannot stop reading Victorian fiction. There’s something about the pace and depth of the prose that’s calming and relaxing to me, so it’s been one classic after the other.

Describe your ideal reading experience (when, what, where, how).
A super long book that you really sink into, with a good chair, and a blanket, and a coffee.

Do you have a favorite book no one else has heard of?
Most people who haven’t been to graduate school in English haven’t heard of Charlotte Bronte’s Villette, or Elizabeth Stoddard’s The Morgesons, which are two of the 19th century’s most astonishing works (in my humble opinion). I’m also keen to push 18th-Century American author Charles Brockden Brown on interested readers, as his novels (particularly Wieland) are so strange and gothic.

Which writers – novelists, playwrights, critics, journalists, poets – working today do you admire most?
I used to joke with students that if an author was alive, I probably knew nothing about them. I’ve been coming up to date recently. I love Susanna Clarke, David Mitchell, Joyce Carol Oates, George Saunders, AS Byatt, and Hilary Mantel.

Do you prefer books that reach you emotionally, or intellectually?
It has to be both. I can handle books where the emotion is foregrounded (for instance, suspense, or a desire to know what happens next) – but the prose and overall story have to be intellectually engaging.

Who is your favorite fictional hero or heroine? Your favorite antihero or villain?
I resonate with George Eliot’s heroine, Dorothea Brooks from Middlemarch, who makes life-altering decisions because she sees herself as a character in a grand narrative of the good and useful life, but who ultimately opens her eyes and lives for herself and for those around her. I think narrative has enormous power in our daily lives, and that George Eliot dissects it with wonderful precision.

What kind of reader were you as a child? Which childhood books and authors stick with you the most?
I was heavily influenced by my voracious-reader parents and my older brother, so I read a lot of fantasy, mystery, and scary stories. I think I read every one of the Christopher Pike Final Friends series, all the R.L. Stein Fear Street books, and way too much Stephen King. My favorite fantasy series were the Redwall series by Brian Jacques, featuring a mouse knight as hero; and The Riftwar Saga by Raymond Feist, featuring magicians.

Have your reading tastes changed over time?
Yes, since childhood, of course, but I’ve also ebbed and flowed in my love of different time periods and genres as an adult. I go through whole periods where I only want to read contemporary fiction (like after finishing the PhD), then whole periods where I’m only interested in things set in the past, whether they’re contemporary historical fiction, or fiction from another era. Then I go through a ghost story phase. At least it helps me narrow down the incredible number of books on my “to read” list. 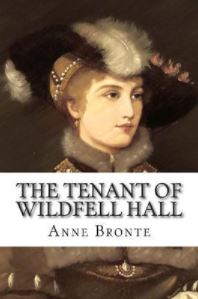 Anne Bronte’s The Tenant of Wildfell Hall. I can’t say with absolute certainty that I haven’t read it before – but it’s always recommended to me by likeminded readers, and it fits with my “Victorian Fiction or Bust” mood.

What book would you most like to see turned into a movie or TV series that hasn’t already been adapted?
The aforementioned Wieland by Charles Brockden Brown. I don’t think it’s ever been attempted. Spontaneous combustion, creepy ventriloquists, and hearing the voice of God? Come on, Hollywood – it’s a gold mine!

What’s the last book you read that made you cry?
Since the birth of my son, literally every scene with a sad child makes me cry. Dickens’s treatment of Jo the Crossing Sweeper in Bleak House just about did me in.

Where do you find your books? Where do you look when you’re searching for your next great read?
I love the Goodreads app, because it allows me to take recommendations from far-flung friends from childhood, college, grad school, and beyond. I’ve also found its algorithms for predicting books I’ll like to

be pretty accurate. I also try to make a point to read things from the Pulitzer and the Man Booker Prize short lists.