Do you have a guilty pleasure book?
Though I don’t read a lot of genre fiction at all, I enjoy reading the mystery novels of PD James and James Lee Burke. That’s not much to feel guilty about, though, considering the quality of the writing and the richness of PD James’ Detective Adam Dalgliesh and James Lee Burke’s Lieutenant Dave Robicheaux.

What is your favorite genre? Which do you avoid?
I read literary fiction, both novels and short stories. I follow short fiction through literary journals such as Paris Review, Ploughshares, Boulevard, Missouri Review, and smaller journals. There’s a lot of great inventive work going on and I’ve had the pleasure of having my short stories published in several journals: "The Clearing", "Up North of the County Line", "In This Wide and Wicked World", and "By No Means".  There’s also a lot of puerile rubbish driven by shock value. Admittedly, I’m not a voracious consumer of the latest, hottest novel writers, mostly because modern publishing has been compromised by concerns other than strictly literary quality. I do admire the work of some new authors such as CE Morgan. Otherwise, I’m catching up on all the great literature I know I’ll never finish in my lifetime. I have no interest in the romance or fantasy genres. Real relationships and human history are more interesting to me.

What is a book that you’re afraid to read?
I only fear my time being wasted by bad writing.

What is a book you dislike/hate that everyone loves? Do you remember the last time you put down a book without finishing?
I was excited to read Bryan Washington’s Memorial, with its Houston setting. On the surface, the characters and situations should have been compelling. I was shocked by the writing quality. It read as informal journaling rather than polished writing.

What book is currently sitting on your nightstand?
I keep a small pile of books, especially poetry that I can dip into. There’s a volume of Lord Byron (poems selected by Paul Muldoon), Milton’s Paradise Lost, and a couple of cherished anthologies I’ve had since undergrad days, English Romantic Poetry (ed. Stanley Appelbaum) and Metaphysical Poetry (ed. Paul Negri). Ralph Ellison’s Juneteenth is there as well because I mean to read it next. 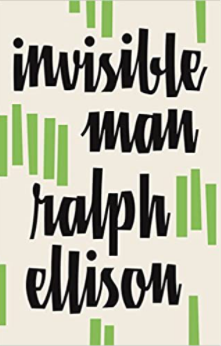 I read Ralph Ellison’s Invisible Man. His prose sings and the rhythm of the language is gripping. Ellison made it clear in interviews that he strived not to be a great Black writer, or to be confined by “Identity,” but to reach for a literary ideal inspired by the Canon. I’ll work excerpts of Ellison’s fiction and essays into readings for my American Popular Music course. I already introduce students to writers such as Frederick Douglas, Sandra Cisneros, and James Baldwin for context.

Are there any classic novels you read recently for the first time?
Dostoyevsky’s novels have a deeply meaningful place in my life, The Idiot and The Possessed being dearest to me. I’d read them all except for House of the Dead, which I just read over winter break. It is, of course, as beautiful as it is unbearable.

Describe your ideal reading experience (when, what, where, how).
If the book is good, I don’t care how I’m reading it. However, I do find that when I’m able to read for long stretches at a time, instead of grabbing passages here and there, the emotional impact is greater.

Do you have a favorite book no one else has heard of? 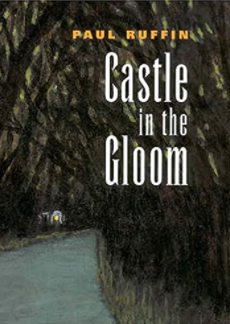 The Texas poet and writer Paul Ruffin wrote a novel called Castle in the Gloom, which combines the Gothic weirdness of the deep Piney Woods of Texas with human drama. I am also sustained artistically by numerous Southern poets who are not terribly well known, especially the Fayetteville poets such as Miller Williams, Leon Stokesbury, Frank Stanford, and Ralph Adamo.

Which writers – novelists, playwrights, critics, journalists, poets – working today do you admire most? 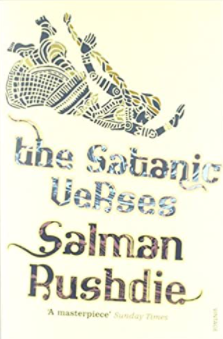 Surely the greatest living writer is Salman Rushdie. Rushdie uses language in the magical, inventive tradition of Chaucer or Shakespeare. And like Saul Bellow, Rushdie has a penchant for juxtaposing elevated, poetic language with broad comedy. It’s a real shame that Satanic Verses was more talked about than read. It represents a genuine grappling with belief and unbelief. And though immigrant experience has been explored many times, Rushdie portrays alienation and assimilation with ingenious metaphors I’ve not seen elsewhere.

What’s the last book you read that made you laugh? 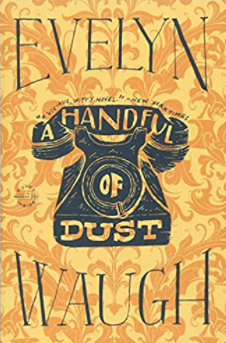 Evelyn Waugh’s A Handful of Dust made me laugh out loud. The stylistic perfection of his prose gives the humor its edge. Set in the perfectly poised upper class, the situations grow increasingly absurd and tragic, culminating in one of the most terrifying characters in literature, a man named Todd who is obsessed with Dickens. Sound weird?  Good!  Read the book! 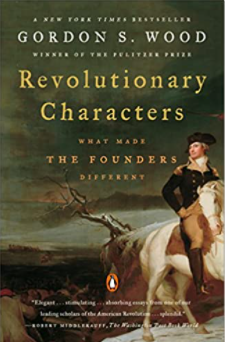 I learned about the power of the Enlightenment value of disinterest. I recommend Gordon S. Wood’s Revolutionary Characters: What Made the Founding Fathers Different. In many corners of academia, Enlightenment values are being tossed out with the bathwater. While great progress has been made pointing out the hypocrisy of a nation seeking its own liberty while denying that liberty to some of its own inhabitants, and the move away from Eurocentrism has enlivened the arts and humanities, I question the targeting of Enlightenment values that gave rise to free expression and democracy.

Do you prefer books that reach you emotionally, or intellectually?
I derive more pleasure from beautifully executed prose style and intriguing technique than from purely emotional content. I’d say my love of a book is 10% subject matter and 90% authorial technique. Fortunately, thoughtful writers who take great care with their work are also keen observers and bring their subjects to life in an emotionally satisfying way.

What book might people be surprised to find on your bookshelf?
I’m a medieval history nut, especially the Crusades. This intersects with my interests in medieval music and literature. I also enjoy reading about the anti-secessionist history of Texas, which is rich. For a general survey of Texas’ role in the Confederacy, I recommend The Seventh Star of the Confederacy, an anthology edited by Kenneth W. Howell. But for an exploration of the anti-secessionist movements, I recommend Lone Star Unionism, Dissent, and Resistance, edited by Jesus F. de la Teja. I’m proud to say that my native neck of the woods in the Texas Big Thicket was home to men who refused to fight for the Confederacy and hid out in the canebrakes there. This is discussed in the book, as well as the pro-Union sentiments of Texas’ large German immigrant community. 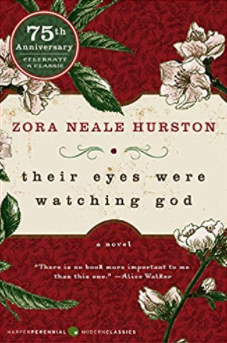 Faulkner’s Quinten Compson and Joyce’s Stephan Dedalus (certainly an antihero) have been such a part of my life that they influenced the way I experience life events. I still feel like Quinten anytime I’m away from my home area. Zora Neale Hurston’s Their Eyes Were Watching God, like Faulkner’s work, catapults the local and the folkloric to a universal plane. Her heroine Janie Crawford is certainly worthy of the mythical scope of Hurston’s tale. The protagonist of Saul Bellow’s Henderson the Rain King is one of those great admirable characters who throws it all away to find purpose.

What kind of reader were you as a child? Which childhood books and authors stick with you the most? 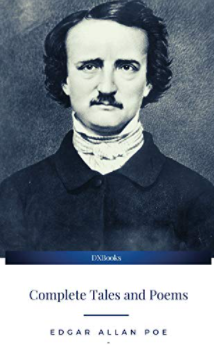 My mother had Tales of Edgar Allen Poe (Whitman Classics) with macabre illustrations by Ati Forberg. I grew up in a severely religious home, in a Pentecostal religion obsessed with spirits good and evil, so I’m not sure my mother meant for me to get my hands on it! Perhaps Poe sparked a Gothic sensibility in me or his work resonated with my personality.

Have your reading tastes changed over time?
Because I grew up in a very anti-intellectual Fundamentalist environment in a small town (the Texas Big Thicket is the buckle of the Bible Belt), I found liberation as a young person through the experimental tradition of early 20th century. It began with TS Eliot and James Joyce. Eliot’s spiritual searching and Joyce’s struggle with Catholicism were analogues of my own post-Fundamentalist experience. It’s impossible to avoid the shadow of Faulkner who showed me that the local transcends to the universal. I gravitated toward the psychological approach to writing, as experienced in Proust. As a composer, I’m intrigued by form, repetition, and voice in literature. My doctoral dissertation in music composition drew heavily on Faulkner’s treatment of time and character. As I grew as a writer, I read more widely and appreciated much more the technique in pre-20th century literature, in writers such as Dostoyevsky, Chekhov, and Henry James. The 20th century authors who have meant most to me as a writer would be Saul Bellow and Isaac Bashevis Singer. Flannery O’Connor has been with me from the beginning, but I can’t really emulate her since my Fundamentalist childhood is already straight out of an O’Connor short story.

You’re organizing a literary dinner party. Which three writers, dead or alive, do you invite?
Saul Bellow, Flannery O’Connor, and Isaac Bashevis Singer. They were all very funny, very opinionated and grappled with spirituality in very different ways. I’d love to have Faulkner there, though he might be quite taciturn or hit the whiskey pretty hard. GK Chesterton would be a hoot but I’m sure he’d dominate the conversation. 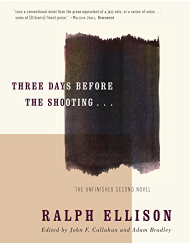 I’ve got Ralph Ellison’s Juneteenth ready to go. After writing The Invisible Man, Ellison was famously beset by doubts and perhaps perfectionism. The Juneteenth we have is only a sliver of what Ellison envisioned. There is a longer version called Three Days Before the Shooting derived from Ellison’s drafts. At any rate, the characters Senator Sunraider and Reverend Hickman are pure genius.

What book would you most like to see turned into a movie or TV series that hasn’t already been adapted?
Since I prefer the psychological approach to writing, most of my favorites wouldn’t transfer to film. Great comedic novels seem to work more successfully in adaptation. Actually, Waugh’s A Handful of Dust was made into a film by Charles Sturridge, and carried very well with a cast that included Alec Guinness and Judi Dench. 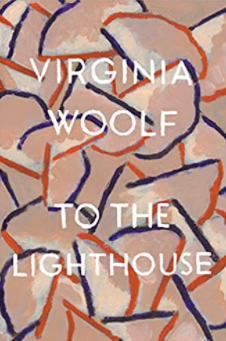 I don’t cry when reading, but I’ve had my breath taken away and set the book down a moment. I vividly remember the instant in Virginia Woolf’s To the Lighthouse when I turned the page to “Part II: Time Passes” and I was unprepared for what the passage of time had wrought. I just recently read Cynthia Ozick’s short story “The Shawl” and its longer companion piece “Rosa,” about a mother’s grief in the Holocaust and the shadow it casts throughout her life. It’s not the grief alone that left me breathless, but how Ozick uses the language to convey the grief.

What’s the last book you read that made you furious?
When I’m in a bookstore, I’m constantly picking up the latest hottest writers and suppressing every impulse to shred it on the spot!

Where do you find your books? Where do you look when you’re searching for your next great read? 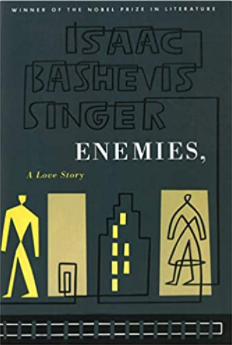 I keep my ears open for new talent and I’m happy when I find a new compelling voice. I’m learning a lot from this book blog and want to follow up on my colleagues’ leads. Otherwise, I shop almost entirely for used books, though. I ordered a used copy of Isaac Bashevis Singer’s Enemies, A Love Story and found a handwritten note from Singer to the book’s recipient still tucked away in the pages. I nearly fainted.